Simon Peter answered him, “Lord, to whom shall we go? You have the words of eternal life, and we have believed, and have come to know, that you are the Holy One of God.” – John 6:68

As other reflections start to trickle in and I’ve had the chance to consider what the past few days of the Revoice conference have meant to me, I keep coming back to the words of Simon Peter in the Gospel of John, words that were echoed multiple times in different seminars, testimonies, and conversations over the weekend. They come after one of Jesus’ hardest teachings—one so difficult that many of his followers turn away: “Whoever feeds on my flesh and drinks my blood has eternal life,” Jesus says, using such seemingly uncareful language that later on the Romans would accuse the early church of practicing cannibalism.

In one sense Peter’s confession is not particularly encouraging—in fact it feels like a sort of backhanded compliment. “Yes Jesus we’ll keep following you, because there isn’t any other better option”—the apparent implication that if there was, the disciples would be right there with the rest of Jesus’ followers whose retreating backs were all that remained of their loyalty. And yet Peter’s declaration of allegiance to Christ contains the very thing that holds any of us near to Christ despite sin, suffering, and opposition: “You have the words of eternal life.”

END_OF_DOCUMENT_TOKEN_TO_BE_REPLACED 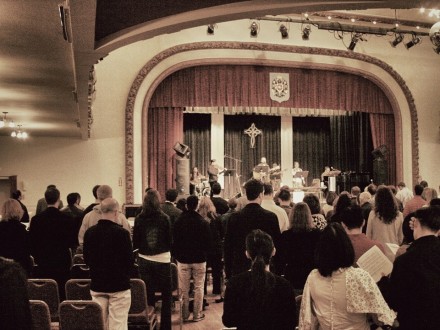 Last week, City Church, a large evangelical church in San Francisco released this letter from its pastor and elders reflecting a shift in their position on same-sex sexual relationships. While they are not the first, nor will they be the last church to do so, their shift is particularly noteworthy because of the church’s original roots in the Presbyterian Church in America, a very conservative evangelical denomination, where it was planted in the model of Tim Keller’s Redeemer Church in New York City. All of this hits a bit close to home for me as an elder in a city church in the PCA.

What I found especially noteworthy were two points made in the letter justifying the shift—one biblical and one pastoral. The elders at City Church write,

For so long this has been a “case closed” kind of issue for evangelicals. But in recent years, multiple respected evangelical scholars and theologians have begun to wrestle with this and a healthy debate is underway. Asking questions about what the Scriptures say on this issue must always be coupled with asking why the Scriptures say what they do and what kind of same-sex activity is being addressed. Scholars and leaders who have previously been united in their interpretations are coming to different conclusions. This does not mean that your view must change, but it does counsel humility with how we each hold our views. Given the status and variety of these opinions, what has become clear to us is that there is no longer clear consensus on this issue within the evangelical community.

END_OF_DOCUMENT_TOKEN_TO_BE_REPLACED

Over at the Gospel Coalition, Corey Widmer has a post that reads like it could have appeared here at Spiritual Friendship. There are at least two points he makes that are especially relevant to our discussions here.

The first has to do with the church as an alternative plausibility structure:

I believe one of the most serious callings of the church in our age is to create new, countercultural plausibility structures that make the demands of the gospel plausible, practical, and attractive. If a gay friend is going to embrace a life of chastity for Jesus Christ, she must be able to look into the future and see not only the loss and pain but also the possibility that a real fulfilling life can be lived. If we don’t work at this task, if we don’t create the kinds of communities in which the countercultural lifestyle we’re advocating is supported and upheld, we’ll continue to see people choose plausibility structures that make more sense and have greater support from the culture.

END_OF_DOCUMENT_TOKEN_TO_BE_REPLACED

This summer I’ve been making my way through Peter Leithart’s excellent work on the theology of Athanasius. Laying out Athanasius’ hermeneutical principles, Leithart explains that for Athanasius the primary framework determining right and wrong interpretation is the overall shape of the biblical story. Thus Leithart says,

The standard of right reading is the ground motif of Scripture as a whole, the history of creation, fall, incarnation, glory. As Frances Young puts it, “Athanasius is not neglectful of the details of the text,” but more basically his reading is guided by a “sense of the overarching plot” that he has inherited as the fundamental narrative of salvation. Thus “the ‘Canon of Truth’ or ‘Rule of Faith’ expresses the mind of scripture, and an exegesis that damages the coherence of that plot, that hypothesis, that coherence, that skopos [scope], cannot be right.”

While this is hardly the only criteria for biblical interpretation, it strikes me as a particularly helpful one. When explaining to others why I’ve been convinced by the traditional interpretation of the biblical text with respect to same-sex sexual behavior, I’ve often said that the first three chapters of Genesis were far more persuasive than any of the so-called “clobber passages”. Of course Genesis 1-3 don’t explicitly talk about same-sex sexuality at all, but I think what I’ve been trying to get at is the point that Leithart is making above about Athanasius: the overall shape of the story should guide our interpretive decisions.

END_OF_DOCUMENT_TOKEN_TO_BE_REPLACED

While the majority of voices here are from single and celibate same-sex attracted Christians, it remains important to maintain heterosexual marriage as a viable vocation for some who are attracted to the same sex. As Ron Belgau notes, the narrative of orientation change has often been over-sold in Christian circles. However, as a response, many have dismissed heterosexual marriage as a impossibility for any same-sex attracted Christians (be those attractions closer the gay or bi portion of the spectrum). In the face of these extremes, we have sought to offer a more nuanced approach to the possibility of heterosexual marriage.

This post provides a roundup of some of the ideas writers at Spiritual Friendship have shared as we have reflected on what is sometimes known as mixed-orientation marriage (MoM).

END_OF_DOCUMENT_TOKEN_TO_BE_REPLACED

As I was sitting at home on Monday night, I had every intention of watching some playoff hockey and then heading to bed. But a quick glance at my Twitter feed during a commercial break reminded me the ERLC Leadership Summit was happening, and that the panel on homosexuality was about to start. Intrigued, I decided to tune in. I kept my Twitter feed up to see what type of response this panel might receive from the broader internet community.

How can I describe what it was like to listen to the panel? As someone who comes from a conservative church background and counts many Southern Baptists as friends, I was both sympathetic and hopeful for the ERLC’s panel discussion. As someone who is deeply invested in LGBT issues and has seen the church fail routinely in this area, I was also nervous. They were, after all, in a sense talking about me.  END_OF_DOCUMENT_TOKEN_TO_BE_REPLACED

Christianity Today posted a two part story last week from a man in a mixed-orientation marriage. I wanted to pass it along to the SF community for a few of reasons:

1. It shows the diversity of stories that fall under the broad categorization of “mixed-orientation marriage.”

Aidyn Sevilla describes himself as a gay Christian in a heterosexual marriage. I generally don’t take any specific label. Some use the label bisexual, others stick with same-sex attracted. Beyond labels, Aidan’s story bears some marked similarities and differences from my own. There were parts of his story I read and thought, “Yes, that’s  exactly how that feels.” There were other parts that didn’t really resonate at all with my own experiences.

END_OF_DOCUMENT_TOKEN_TO_BE_REPLACED

This post is something of a follow up to Wes’s discussion of whether being gay is sanctifiable, especially this comment toward the end: “But let’s remember that much of what contemporary Christians would classify under the label “being gay” is part of what Scripture describes under the heading of that new, resurrection life in Christ.” I suppose in a sense it also echoes Aaron’s recent (much more philosophical) post about same-sex eros.

A couple years back I was leading a support group for men who experienced same-sex attraction. The majority of these men experienced their same-sex attraction as a burden, a disabling secret that had hindered their relationships with God and others. In an effort to get everyone to process the role that their sexuality had played in shaping their stories, we did an exercise that I called “the cards we are dealt.” Yes, it is trading on a cliché, but sometimes clichés have a certain traction.

The guys wrote five “cards” they were dealt in life. They could be experiences, personality traits, inclinations, tastes—the only requirement was that they came as something given, not chosen. We then went around sharing our cards one at a time, describing the effect they had on our stories and then deciding whether or not we would trade them in if given the chance.

END_OF_DOCUMENT_TOKEN_TO_BE_REPLACED

Yesterday, Tom Daley, the Olympic medalist in diving from England, came out in a short five-minute video on YouTube.

You’ll note I said, “came out,” which in current parlance can mean several things, but is most commonly taken to mean publicly identifying as gay. Indeed as this article in the Guardian points out, many major media outlets took it this way, describing Daley as having come out as gay. However, if you watch the video, Daley never claims a particular sexual identity (gay, bisexual, or otherwise), but simply says that he is in a relationship with another guy. Indeed, he adds that he still fancies girls and that his relationship with this guy seemingly took him by surprise. What do we make of a statement like this? And is it even our job to make something of it?

END_OF_DOCUMENT_TOKEN_TO_BE_REPLACED

Several comments on my recent post identified an important question worthy of greater reflection. I wrote, “It [marriage] should only be pursued when there is a strong spiritual, emotional, and physical attraction between two people.” The question: How is a man who is sexually attracted to men to qualify his physical attraction to a woman? Is it tied to spiritual and emotional attraction?

I initially offered the tripartite physical/emotional/spiritual grid for attraction in an attempt to demonstrate that any romantic relationship operates on more than just the physical or sexual level. It seems to me that the nature of attractions themselves are actually much more complicated than this, to the point where trying to make clean distinctions between these three categories may prove problematic. I personally feel this difficulty when I try and describe how my attraction to Christy moved from being primarily emotional to substantially physical, as well as the place that spiritual attraction fit into that process.