A friend of mine recently brought my attention to a video called “Homosexuality and Hope: My Journey to Truth in the Catholic Church.” In the video, the speaker says:

We can let go of any shame or guilt internalized on account of the existence of those attractions. Ok? This whole myth that we’re supposed to feel shameful? Forget it. It’s not part of Catholic Church teaching, and if you do have shame or guilt because of the fact that you might have same sex attractions, you can let that go. We’ve all been able to let that go. It’s absolutely liberating.

I feel bad referring to the person delivering this message as “the speaker.” It feels awkward to talk about him without using his name. But, for reasons which I’m sure had nothing to do with shame, he chose not to share his name with his audience.

Moreover—and again, I’m sure this had nothing to do with shame—he chose not to let us see his face, either:

I wish I could say that I’d just picked an especially awkward moment in the video. Unfortunately, the speaker treats us to fifteen minutes of this painfully awkward, faceless view.

Not only does he not tell us his name or show us his face, he also, despite the promise made in the title, does not share anything about his own particular journey toward truth. Instead, he shares 5 truths taught by the Catholic Church about homosexuality. That is a perfectly reasonable thing for him to do: but the title’s promise of a personal journey only further highlights how impersonal, indeed depersonalized, this video is. And this just reinforces suspicion that the Church’s teaching itself is impersonal and depersonalizing.

But it shows something very different.

About a year and a half ago, the National Catholic Register published an article, “Courage Continues Mission of Its Founder, Father Harvey.” The author, Matthew Rarey, had interviewed Fr. Paul Check, Fr. Harvey’s successor in Courage. The interview began with this exchange:

Matthew Rarey: What did you think about this year’s conference?

Fr. Paul Check: I wish that the people who attended the conference who are Courage members could answer that question because they are the true heart of Courage, and they can give the most effective testimony about the apostolate.

If Fr. Check actually wished this, then it would have been reasonable to suggest that Mr. Rarey talk to Courage members and include their perspectives in the article. And I would have expected that a good journalist, upon learning that Fr. Check viewed the perspective of Courage members as more important than his own, would have made an effort to include their voices in his article. (In fairness, a couple of the interviewer’s questions were drawn from conversations with members, so their voices were not completely silenced; yet it is still strange to read an article where we barely hear from those who, we are informed almost in the very first line, have more to contribute than the voice the reporter has decided to focus on.)

With what I’m sure is unintentional irony, the Register chose to illustrate this interview with Fr. Check—in which both Fr. Check and the Register’s interviewer fail to present us with the voices whom Fr. Check says he wishes we could hear—with this faceless (stock) photograph, to save us from seeing the faces I’m sure both of them wish we could see: 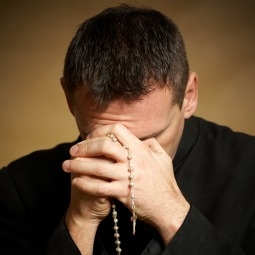 One of the most popular posts I’ve put up on this blog is called Faces: a pet peeve. It chronicled the tendency, among Christian publishers, to obscure faces on the covers of books about homosexuality.

Both the author of the video and Fr. Check want to reach out to people who struggle with same-sex attraction. They want to assure them that everyone is welcome in the Catholic Church, regardless of what temptations or sins they struggle with.

But people don’t just listen to the words we say. They also listen to the way we say them, and the context in which we say them. As long as the person trying to welcome you won’t look you in the eye, or listen to what you say, it’s hard to take the words of welcome at face value.

In an address to catechists and religion teachers at the Jubilee of Catechists in 2000, then Cardinal Joseph Ratzinger wrote:

Human life cannot be realized by itself. Our life is an open question, an incomplete project, still to be brought to fruition and realized. Each man’s fundamental question is: How will this be realized—becoming man? How does one learn the art of living? Which is the path toward happiness?

To evangelize means: to show this path—to teach the art of living. At the beginning of his public life Jesus says: I have come to evangelize the poor (Luke 4:18); this means: I have the response to your fundamental question; I will show you the path of life, the path toward happiness—rather: I am that path.

This is why we are in need of a new evangelization—if the art of living remains an unknown, nothing else works. But this art is not the object of a science—this art can only be communicated by [one] who has life—he who is the Gospel personified.

This is what we’ve tried (no doubt quite imperfectly) to do here at Spiritual Friendship. We want to explore what it means to internalize the Gospel, and to let it transform our lives and our relationships. We’ve tried to share both the positive things we’ve learned about faith and friendship, and some of the struggles and frustrations we’ve encountered along the way.

We hope that by sharing our stories and our insights about growing in Christ as celibate gay Christians—under our own names, and without obscuring our faces—we can make some small contribution to the kind of evangelization Cardinal Ratzinger spoke about.

But the kind of (presumably) well-intentioned outreach I drew attention to above actually ends up sending the opposite message: the Church is not a place where those with same-sex attraction are welcome, where they can show their face, or speak and be heard.

There’s a lot of work left to do.

9 thoughts on “Welcoming and shaming”