Crisis Magazine recently covered several writers at Spiritual Friendship with some caution at the notion of chaste friendship. Austin Ruse’s skepticism shines through when he writes:

“Their ideal is that you can draw close to someone of the same-sex, love them intimately and intensely, yet never cross the line into sexual activity. They point to the relationship between Jesus and young John as a model. Recall John was the “one whom Jesus loved” and who laid his head on Jesus’ chest, something if done today would clearly be considered gay.”

This, if anything, should be a lesson to us from history. It’s a well-documented fact that previous generations were far more comfortable with people of the same gender sharing physical affection. The Art of Manliness had a terrific post on this earlier this summer, with the photographic evidence to prove it. 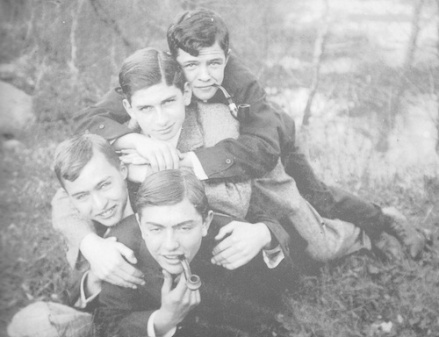 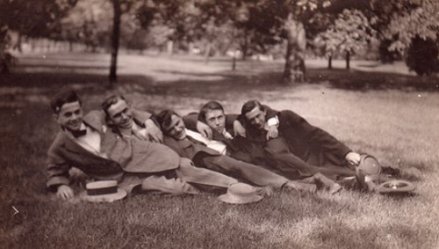 What’s astonishing is not the fact that men were willing to openly out themselves by taking such photographs, which were ubiquitous at the time. Rather what’s stunning is how broadly this sort of physical intimacy was understood to be nothing more than dear friendship. A bosom buddy was precisely that—a buddy!

A consequence of our bizarre cultural blend of both open homosexuality and yet still deep-seated homophobia is that people worry that open displays of affection for people of the opposite gender will provoke misinterpretations of orientation. As college freshmen, I remember the first time that my best friend and I were walking around Cambridge, MA holding hands; we noted after a while that people would probably think us lesbians and promptly ceased such public displays of affection. We had no such concerns back home in more conservative Irvine, California.

It’s precisely the dearth of this physical intimacy within normal friendships that makes celibacy in the modern world so difficult. Man was made with a need for physical intimacy, but in our rather touch-phobic society, it’s difficult to meet that need outside of a romantic relationship.

Marriage counselor Gary Chapman’s best-selling book The Five Love Languages makes a case that people express and receive love primarily in five ways: in gifts, quality time, words of affirmation, acts of service, and physical touch. Conflict can often arise in relationships when one person offers love in one “language” to which their partner is less receptive.

Churches tend to be fairly good at offering the first four; I’ve seen my peers pour into one another gifts, time, encouragement, and acts of service. The church is arguably better than most of the world at offering acts of physical touch. My average number of hugs per day rises markedly on Sundays (when I attend church) and Tuesdays (when I have small group). But a hug here and there cannot fully compensate for the physical intimacy that celibates and single people lack, especially if they are people whose primary “love language” is that of physical touch.  If we ever want to make lifelong celibacy a feasible option for people in the church (gay or straight), I suspect the answer may lie not in treating physical intimacy as though it’s the “hottest of fires” but rather in trying to create more opportunities for the gentle warmth of physical touch within friendships.

Some caution is definitely due; I would warn against such intimacy when there is physical attraction on the side of both parties. But in most circumstances, I suspect that helping our brothers and sisters meet their need for physical intimacy within chaste friendships in the church will be far better for their well-being than leaving them to their own devices to meet this need. I have no doubt that many a desperate hook-up is pursued simply out of a need for physical touch and affirmation. If so, there is a great danger in not offering this sort of support.

I witnessed my campus fellowship in college do this quite well. Guys and girls formed massage circles in utmost purity. Students were comfortable with open displays of affection and most did away with this silly side-hug business. Friendships were more likely to cross gender lines because life is richly shared together – from commiserating over the same classes to living in the same dorms. This level of shared life fosters more opportunities for chaste physical affection.

Yet often in the broader church where life is not so lived together, these opportunities break down. To me, the lack of physical intimacy in the church is not a sign that we’ve erected proper boundaries around a dangerous flame, but that we have failed to live up to our calling as a spiritual family. Within a family, physical touch is not sexualized to be an indicator of incest, but is the natural outpouring of a pure and rich love that demands bodily expression. So, too, should our expressions of physical intimacy in the church be signs not of sexuality, but the natural indication of our deep love for our brothers and sisters in Christ.

If the church can express that sort of chaste love for all its members, then our deepest human desires can serve not simply to tempt us but to help us cleave all the more closely to the church. If Jesus let John share his bosom, then it seems we have a more than sufficient precedent to do the same.

Jordan Monge is the Northeast Regional Director and Director of Content Development for the Veritas Forum. She studied Philosophy at Harvard University, where she converted to Christianity, and blogs at jordanmonge.com.

12 thoughts on “Jesus, John, and the Intimacy of Physical Touch”