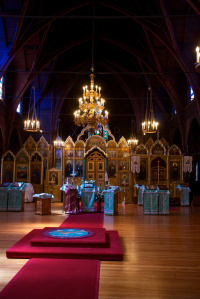 There are a number of factors that contribute to my conservative views as a celibate-gay Christian. The traditional view of marriage that I’ve held my whole life rests on several things and goes beyond the main passages of scripture that are so often brought up. Scripture is of course foundational for many of my beliefs regarding my sexuality as are the consistent teachings of the Church for over two millennia; they aren’t however the strongest day to day reminders of why I’ve chosen celibacy as my path. From my Eastern Orthodox upbringing I’ve grown up with the stories of countless men and women who have followed Christ’s call to take up their cross, deny themselves and follow after him. These saints, and especially the ascetics, are my daily reminder of the well-worn path I pursue.

Certainly many of these saints followed celibacy, often in a monastic context, but it’s not for that reason alone that I feel convicted in my own celibacy. Rather, it is that each and every one of them saw absolutely nothing as being of greater value or worth than Christ. There was nothing exceptionally radical, or out of place in their belief that in their pursuit of Christ everything was on the table, including their very life. Because of their witness, and their lives which we listen to and sing about daily in the Church the idea that surrendering my own desire for romantic intimacy and the erotic expression of that desire was something too great to be asked to give seems less out of place or extreme. That isn’t to diminish the weight and the calling of the Church and of community to help each other bear whatever burden they may be called to endure, but rather helps me place my own suffering and my own self-denial in the ancient tradition of the saints of the Church.

A sermon I heard recently called us to look at the lives of the great ascetic saints of the Church and see them as examples, not to necessarily flee all the comforts of this life, but to remind us that nothing should become so comfortable for us as to come before Christ in our lives. So much of why I struggle with theology that seeks to affirm the goodness of a sexual relationship between two people of the same gender is because its very pursuit seems to go against the grain of radical self-denial and surrender witnessed by the saints, and called for by the Church. The notion that calling people to singleness, celibacy, and the denial of romantic sexual fulfillment is too great a thing to ask seems so very out of place when you worship in a church adorned with the icons of martyrs and saints who gave up their comfort, their families, and their own lives for the sake of Christ.

Growing up in a church where weekly fasting, and a daily prayer rule is the norm has taught me that I am not the master of my own life or my own schedule. I do not get to decide, struggle though it may be, when I want to fast, or when I want to attend services; I am called to do so by the witness of far greater spiritual counselors in tune with the will of God who make up the Church and have conformed their lives to the very Word of God. I am surrounded by a culture that affirms that what I want, and what I feel should have paramount authority in my life and it is the Church that constantly calls me out of that self-centered delusion. I made a choice to submit myself to the Word of God and his Church and when that submission brings me suffering because it calls me away from myself and my own will I am most reminded that I am not alone in this journey or this call. I need only to look to the cloud of witnesses that surround me each day as I worship and be reminded that it is not all for nothing, that in fact by surrendering every part of my life, as much as I may fail again and again, I will truly gain my life. In humility and in choosing obedience I can truly find freedom.

Gregg Webb is Eastern Orthodox, and is studying counseling at Covenant Theological Seminary in St. Louis. He founded the Eleison blog and can be followed on Twitter: @EleisonBlog.

6 thoughts on “The Cloud of Witnesses”