Today is the feast (at least in the modern Roman calendar) of Sts. Gregory of Nazianzus and Basil the Great. In the West, Basil and Gregory are recognized as Doctors of the Church, while in the East, they are—along with St. John Crysostom—recognized as the Three Holy Hierarchs. 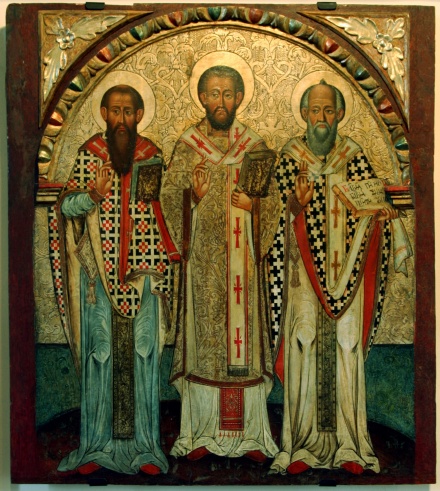 Today’s Office of Readings includes this excerpt from one of Gregory’s sermons about his friendship with Basil:

Basil and I were both in Athens. We had come, like streams of a river, from the same source in our native land, had separated from each other in pursuit of learning, and were now united again as if by plan, for God so arranged it.

I was not alone at that time in my regard for my friend, the great Basil. I knew his irreproachable conduct, and the maturity and wisdom of his conversation. I sought to persuade others, to whom he was less well known, to have the same regard for him. Many fell immediately under his spell, for they had already heard of him by reputation and hearsay.

What was the outcome? Almost alone of those who had come to Athens to study he was exempted from the customary ceremonies of initiation for he was held in higher honour than his status as a first-year student seemed to warrant.

Such was the prelude to our friendship, the kindling of that flame that was to bind us together. In this way we began to feel affection for each other. When, in the course of time, we acknowledged our friendship and recognised that our ambition was a life of true wisdom, we became everything to each other: we shared the same lodging, the same table, the same desires the same goal. Our love for each other grew daily warmer and deeper.

The same hope inspired us: the pursuit of learning. This is an ambition especially subject to envy. Yet between us there was no envy. On the contrary, we made capital out of our rivalry. Our rivalry consisted, not in seeking the first place for oneself but in yielding it to the other, for we each looked on the other’s success as his own.

We seemed to be two bodies with a single spirit. Though we cannot believe those who claim that everything is contained in everything, yet you must believe that in our case each of us was in the other and with the other.

Our single object and ambition was virtue, and a life of hope in the blessings that are to come; we wanted to withdraw from this world before we departed from it. With this end in view we ordered our lives and all our actions. We followed the guidance of God’s law and spurred each other on to virtue. If it is not too boastful to say, we found in each other a standard and rule for discerning right from wrong.

Different men have different names, which they owe to their parents or to themselves, that is, to their own pursuits and achievements. But our great pursuit, the great name we wanted, was to be Christians, to be called Christians.

9 thoughts on “St. Gregory of Nazianzus: Two bodies, but a single spirit”