Today is the feast of St. Francis of Assisi, whom I chose as my confirmation saint when I was received into the Catholic Church in 1999. 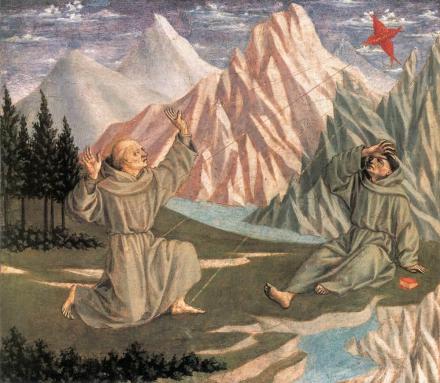 G. K. Chesterton’s biography of St. Francis was one of many books that helped introduce me to the truth and beauty of the Catholic faith. But Francis himself stuck with me in a special way.

I was particularly drawn by the powerful combination of joy and asceticism in his personality.

Asceticism was not new to me. I had grown up Southern Baptist, and joined the Presbyterian Church in America in college. I had been profoundly moved by Bonhoeffer’s Cost of Discipleship. I had also been committed to celibacy since my late teens. So though I have learned more of asceticism and the cross since becoming Catholic, I already knew about the cost and sacrifice involved in responding to Christ’s call to come and follow.

What I did not realize, until I encountered St. Francis, was the deeper “Yes!” that made sense of and gave life in the midst of the many things I had to say “no” to in order to remain faithful to Christ. Chesterton wrote:

The practical reconciliation of the gaiety and austerity I must leave the story itself to suggest. But since I have mentioned Matthew Arnold and Renan and the rationalistic admirers of St. Francis, I will here give a hint of what it seems to me most advisable for such readers to keep in mind.

These distinguished writers found things like the Stigmata a stumbling block because to them a religion was a philosophy. It was an impersonal thing; and it is only the most personal passion that provides here an approximate earthly parallel. A man will not roll in the snow for a stream of tendency by which all things fulfil the law of their being. He will not go without food in the name of something, not ourselves, that makes for righteousness.

He will do things like this, or pretty like this, under quite a different impulse. He will do these things when he is in love. The first fact to realise about St Francis is involved with the first fact with which his story starts; that when he said from the first that he was a Troubadour, and said later that he was a Troubadour of a newer and nobler romance, he was not using a mere metaphor, but understood himself much better than the scholars understand him. He was, to the last agonies of asceticism, a Troubadour. He was a Lover. He was a lover of God and he was really and truly a lover of men; possibly a much rarer mystical vocation. A lover of men is very nearly the opposite of a philanthropist; indeed the pedantry of the Greek word carries something like a satire on itself. A philanthropist may be said to love anthropoids.

But as St. Francis did not love humanity but men, so he did not love Christianity but Christ. Say, if you think so, that he was a lunatic loving an imaginary person; but an imaginary person, not an imaginary idea. And for the modern reader the clue to the asceticism and all the rest can be found in the stories of lovers when they seemed to be rather like lunatics. Tell it as the tale of one of the Troubadours, and the wild things he would do for his lady, and the whole of the modern puzzle disappears. In such a romance there would be no contradiction between the poet gathering flowers in the sun and enduring a freezing vigil in the snow, between his praising all earthly and bodily beauty and then refusing to eat, and between his glorifying gold and purple and perversely going in rags, between his showing pathetically a hunger for a happy life and a thirst for a heroic death. All these riddles would be easily resolved in the simplicity of any noble love; only this was so noble a love that nine out of ten men have hardly even heard of it.

We shall see later that this parallel of the earthly lover has a very practical relation to the problems of his life, as to his relations with his father and his friends and their families. The modern reader will almost always find that if he could only find this kind of love as a reality, he could feel this kind of extravagance as a romance.

But I only note it here as a preliminary point because, though it is very far from being the final truth in the matter, it is the best approach to it. The reader cannot even begin to see the sense of a story that may well seem to him a very wild one, until he understands that to this great mystic his religion was not a thing like a theory but a thing like a love affair.

It is, of course, difficult to find words to talk about our love of God. But from St. Francis I learned something about the beauty and adventure of life with Christ; this has helped to inform my own exploration of the possibilities of friendship with Him.

In addition, Francis’s beautiful friendship with St. Clare is a reminder in its own right that friendship between a man and a woman can be intense and spiritually fruitful while also being perfectly chaste.

This kind of love is deeply confusing to the modern world, which had made sex and romance into even more of an idol than the ancient pagans did. But though it does surprise many Catholics, it should not; we should know that

The virtue of chastity blossoms in friendship. It shows the disciple how to follow and imitate him who has chosen us as his friends, who has given himself totally to us and allows us to participate in his divine estate. Chastity is a promise of immortality.

Chastity is expressed notably in friendship with one’s neighbor. Whether it develops between persons of the same or opposite sex, friendship represents a great good for all. It leads to spiritual communion. (Catechism 2347)

As Pope Francis made clear in his recent encyclical, there is a deep connection between St. Francis’s love of God’s creation, and his concern for the right ordering of human loves—even at the cost of a painful asceticism to conform our fallen desires to God’s wise plan.

It’s easy to look at the contrast between the monastic orders that defined religious life before Francis, and Francis’s own mendicant spirituality, and see something radically new. In fact, however, Francis seemed radical precisely because he took seriously the eternal truths of the Gospel, including those which had been ignored or distorted by his own age.

And Francis’s example is one reason that I have encouraged the writers at Spiritual Friendship to think about friendship in the contemporary world in light of the Bible and Christian tradition. I do not, of course, imagine that I have anything like Francis’s sanctity. But from his example, I have learned the power of looking to Christ to illuminate my own experiences and existential dilemmas with His light. And I hope some of that light has informed our reflections together here.

One final way that St. Francis has shaped my own thinking is the realization that the church can be transformed by inspiration as well as through institutions. The monastic orders of Francis’s time required an enormous capital investment to expand. The Franciscan call, on the other hand, required only a willingness to embrace his radical way. The order did not require either centralized control or raising large amounts of capital to expand.

Insofar as Spiritual Friendship is a movement, it has no central organization or significant capital. But we aren’t trying to build something like that. We seek only to remind Christians of the spiritual value of friendship in Christ, and to encourage them to take that more seriously in among their friends, family members, and Christian communities.

It is worth remarking, parenthetically, that friendship is not a subject that is only of interest to same-sex attracted Catholics. I have heard from more than a few straight readers who have appreciated what we’ve written, not because of how it helps them understand their gay or lesbian friends, but because it addresses their own longing for deeper friendship. In our culture, we’ve lost a sense of the value of friendship, and presumed that the only real solution to loneliness is romantic, sexual, marital relationships. This of course makes pastoral care for gay and lesbian Christians who are trying to follow the traditional Christian sexual ethic difficult. But it also contributes to a much wider isolation felt by men and women in our culture, who have romance, but lack the robust structure of long-term friendships which did much more to tie communities together in previous generations than it can do now. The challenge of loneliness which we face so directly is actually a challenge for almost everyone in modern society. If our efforts to recover the theology and practice of friendship help contribute to a wider recovery of the value of friendship in the Church and in society at large, that will be a valuable contribution to the Church as a whole, as well as an important contribution to our own well-being.

Just this afternoon, I had coffee with a Baptist pastor who spoke of how a true understanding of friendship is essential for all Christians, gay or straight. He also spoke of how my writings have been an inspiration to those in his own congregation.

As the influence of St. Francis extends far beyond the Franciscan order, I hope that the teachings on friendship cultivated here can bear fruit throughout the wider body of Christ.

Today is not only the feast of St. Francis; it is also the opening day of the Synod on the Family. Let us pray that St. Francis’s spirit of radical, ascetic joy may inspire the Synod Fathers as they seek to articulate the eternal truths of the Gospel in language that will speak to the people of our time so that we can be a bridge, and not a roadblock, to God.

2 thoughts on “Reflections on the Feast of St. Francis”