One thing that has always struck me about Rosaria Butterfield’s story is how different it is from my own. By Butterfield’s account, she initially dated men and had a few bad experiences. She did not start to date women until her late twenties, after becoming involved in feminist academia. From her telling, it seems it was less a matter of pursuing relationships with women because she was naturally attracted to them, and more a matter of rebellion against traditional ideas. And indeed, Butterfield describes her primary sin issue as rebellion against God’s design. 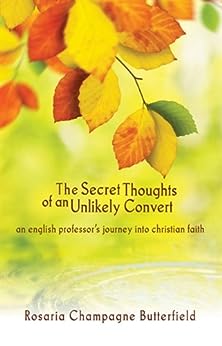 Contrast this with my own story. As I’ve discussed before, I first started to realize that I was attracted to other guys around puberty, though I was in denial about it for quite a while. I was horrified and ashamed over this, because I was committed to following Christianity and never bought the revisionist arguments about sexual ethics. As a result, my primary response was to try to rid myself of my feelings for the same sex. A lot of my questions and difficulties came from the realization that my feelings just weren’t changing, despite my best efforts. I certainly had (and still have) some struggles with sin in terms of things like lustful thoughts, but I’m a virgin, and I never got into porn.

Why should we expect that the same approach that worked for Butterfield would work well in my situation?

It’s definitely true that there’s a single Gospel for all believers. Nonetheless, we usually recognize that people in different situations will need different approaches to bring this same Gospel to bear in their lives.

There are legitimate concerns with forming an identity around sexual attractions. Furthermore, some people who speak of “sexual orientation” do so in a way that confuses discipleship, and some outright reject the Christian understanding of sexuality. But it’s inaccurate to characterize everyone who speaks of their “sexual orientation” as if they’re saying the same things and making the same mistakes. You have to look at what each person actually believes.

With that in mind, I’d like to focus on another segment of the video I discussed last time.

How grateful I am to God that the long, hard battles, and the short easy wars over my broken and bent sexuality started for me in the late 1990s, and not in 2016. How grateful I am that I was first loved and embraced by, and then discipled by, a biblical pastor’s wife. And that I sat under the wise preaching of a Christian pastor, who was also my neighbor and my friend. How grateful I am that the members of my church took me into their household and families. I’ve never had to worry about where I was going to have dinner or celebrate anything. How much harder my battle would have been today, if I had to contend with the whisperings of doubt that the unbiblical invention of gay Christianity brings. Had I been discipled by the teachings of the gay Christian movement instead of by a faithful pastor who upheld who upheld the whole counsel of God, it would have been like putting a millstone around my neck. And I doubt that I would have survived that millstone to be talking to you today.

It’s a blessing that God worked in Rosaria Butterfield’s life in this manner. But in my own life, it has been folks Butterfield would classify as part of “the gay Christian movement” without whom my faith might not have survived for me to be writing today.

Let me unpack that a bit. As I said above (and wrote about previously), a lot of important processing of my faith came after I realized that, despite my best efforts, I was still just as attracted to guys as I’d been when I was an early teenager. Rather than coming to the conclusion that God’s plan was wrong and then pursuing gay relationships, as Butterfield did in her late twenties, I had simply felt this way for as long as I’d had significant sexual or romantic feelings.

By this point in time, I had discovered that there were a significant number of other people who had a similar experience to mine. The language of mainstream culture described this phenomenon as “sexual orientation,” simply describing the long-term pattern of a person’s attractions. I was sure that if I had been able to drum up the courage to discuss my attractions with some of my public high school peers, for example, they would have told me I had a “bisexual orientation.”

For a while I rejected that mindset. Rather than being “bisexual” I just “struggled with unwanted same-sex attraction.” But the difference ended up being mostly semantic. I still recognized that some people found themselves with persistent unwanted same-sex attraction, and I didn’t want to be one of them any longer. And the rhetoric used by many conservative Christians, and those affiliated with Exodus International in particular, gave me the idea I could do this.

When life didn’t pan out as I had hoped or expected, I was left with a distinct sense of having been lied to by the conservative Christian world. If the only way to uphold the teaching of Scripture depended on this kind of deception, how could I believe it? Did I have a choice beyond abandoning my high view of Scripture, or worse, abandoning my faith entirely?

Fortunately, by the time I got to this point I had seen other options. There was a nascent group of Christian bloggers talking about their ongoing experience of same-sex attraction, and how they were looking to be faithful to Christian teaching in the midst of that. Some of them used words like “gay” and some did not. But they recognized that same-sex attraction was a reality that wasn’t about to just disappear, and they shared a commitment to the traditional, orthodox understanding of what Scripture says about sexual ethics.

This gave me a framework for processing what I was going through that addressed some of the particulars of my experience. Generic statements about the Gospel never did that for me, for reasons that should surprise no one.

And over time, I grew to appreciate the use of “orientation” language. In broader culture, it really had just come to mean the pattern of a person’s attractions over time. So it made sense to understand this as a phenomenological (not ontological) term, describing a common experience. It served the same role as “same-sex attracted” had always served before. By using the same language as the broader culture, while also recognizing the flawed ideas introduced by thinkers like Sigmund Freud, they were able to speak to a group of people who otherwise were quite closed to Christian teaching.

These bloggers were essentially the “side B gay Christian movement,” and Spiritual Friendship is a more recent outgrowth of their approach. While I understand the concerns some Christians have with “identity” language, we are trying to bring the Gospel to a large group of people who need it, both inside and outside the Christian Church. We’re not perfect, and we need the rest of the body of Christ to keep us on the right path. But I think our approach is valid and needed, Butterfield’s criticism notwithstanding.

17 thoughts on “Is the “Side B Gay Christian Movement” a Millstone?”