This weekend, I will be joining Aaron Cobb on the Theologues podcast to discuss his book Loving Samuel: Suffering, Dependence, and the Calling of Love. (Full disclosure: Aaron is a former classmate of mine in the PhD program in Philosophy at Saint Louis University.)

The book tells the story of Aaron’s son Samuel, who was diagnosed with Trisomy 18 in September, 2011. Most Trisomy 18 babies die in utero; of those who are born alive, 90% will die within the first year. Even the tiny minority who live past their first year face significant challenges and handicaps.

Despite this difficult prognosis, Aaron and his wife, Alisha, chose to carry Samuel to term. He was born in January, 2012, and died five short, difficult, precious hours after his birth. Aaron comments:

Fulfilling this vocation was difficult and required a choice to embrace the suffering it would engender. But we are convinced that this choice is part of what it means to love; to choose to love is to open oneself simultaneously to both joy and suffering. Thankfully, a community of fellow sufferers provided the gifts and grace of friendship, seconding and sustaining our choice. Fostering courage and hope, they made it possible to live well in the midst of our suffering.

I think this captures an important aspect of dealing with any challenge: being able to connect with others and together “bear each other’s burdens.”

Aaron and I both learned to teach medical ethics under the guidance of Fr. John Kavanaugh, SJ. In the book, Aaron recounts a story Fr. Kavanaugh told about a time when he was struggling to make sense of the life and death of a child who had been born prematurely:

Tamika was no bigger than the size of a person’s hand and had been born, in Father Kavanaugh’s words, “sick and shriveled.” Reflecting on Tamika’s life, in a moment of despair, Father Kavanaugh asked his friend who had nursed and cared for Tamika throughout her short life, “What on earth did Tamika ever have?” Father Kavanaugh’s friend responded, “She had the power to call out love from me.”

Suffering always has this power to call forth love. Sharing our struggles, in appropriate ways, can be both a way of encouraging others with similar challenges, and a way of opening ourselves to the grace and encouragement we need to sustain our vocations in the midst of suffering.

During Samuel’s difficult pregnancy, Aaron read Benedict’s encyclical letter Spe Salvi (on Christian hope), and found these words true to his experience of support from friends and family:

[T]o accept the “other” who suffers means that I take up his suffering in such a way that it becomes mine also. Because it has now become a shared suffering, though, in which another person is present, this suffering is penetrated by the light of love. The Latin word consolatio, “consolation,” expresses this beautifully. It suggests being with the other in his solitude, so that it ceases to be solitude.

I’m looking forward to talking more about Aaron’s experiences and the insights he gained from them in the podcast this weekend. I hope you’ll be able to join us for the Livestream Saturday, August 30 from 8:00-9:30 pm CDT, or listen later on the Theologues website. (I was previously on Theologues to discuss sexuality and Spiritual Friendship. There was so much to say the editors decided to include an extended Q & A.) 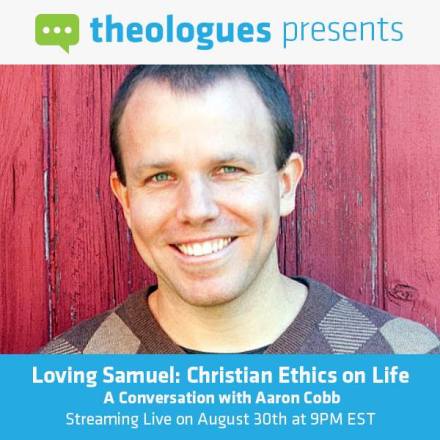 One thought on “Friendship and Accompaniment: A Conversation with Aaron Cobb”