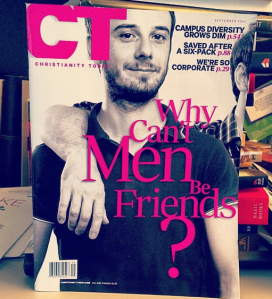 I wrote the cover story for this month’s issue of Christianity Today on—you guessed it!—friendship.

A lot of what I say in the piece grew out of conversations here at SF, and I am truly grateful to you all for reading and thinking with me over the past months about these things. A fuller version will appear in my forthcoming book, but until then, here’s a teaser trailer:

I imagine a future in the church when the call to chastity would no longer sound like a dreary sentence to lifelong loneliness for a gay Christian like me. I imagine Christian communities in which friendships are celebrated and honored—where it’s normal for families to live near or with single people; where it’s expected that celibate gay people would form significant attachments to other single people, families, and pastors; where it’s standard practice for friends to spend holidays together or share vacations; where it’s not out of the ordinary for friends to consider staying put, resisting the allure of constant mobility, for the sake of their friendships. I imagine a church where genuine love isn’t located exclusively or even primarily in marriage, but where marriage and friendship and other bonds of affection are all seen as different forms of the same love we all are called to pursue.

By shifting our practice of friendship to a more committed, honored form of love, we can witness—above all—to a kingdom in which the ties between spiritual siblings are the strongest ties of all. Marriage, Jesus tells us, will be entirely transformed in the future, barely recognizable to those who know it in its present form (Matt. 22:30). Bonds of biology, likewise, are relativized in Jesus’ world (Mark 3:31–35). But the loves that unite Christians to each other across marital, racial, and familial lines are loves that will last. More than that, they are loves that witness that Christ’s love is available to all. Not everyone can be a parent or a spouse, but anyone and everyone can be a friend.