Guest post by the Institute for the Study of Sexual Identity and Dr. Christine Baker.

In January of this past year, the Institute for the Study of Sexual Identity (ISSI), under the leadership of Dr. Olya Zaporozhets and Dr. Mark Yarhouse, conducted a study concerning psychological factors and the spirituality of celibate gay Christians that relate to the wellbeing of “Side” B gay Christians. One of the student members of ISSI, Christine Baker, recently completed the analysis and write-up of the collected data in her dissertation, which is entitled, “Attachment, Well-Being, Distress, and Spirituality in Celibate Gay Christians”. We would like to first begin by expressing our gratitude to everyone who participated in the study. We are thankful for your time as it is very valuable, especially in such a busy world. We, therefore, truly want to thank you all for taking the time to complete the survey. We would also like to provide you all with a short summary of the results, as part of the debriefing process and in appreciation for the contribution to the research you all provided through your participation.

As seen in the title of (the now) Dr. Baker’s dissertation, the four factors being studied in the celibate gay Christian population were attachment style, well-being, distress, and spirituality. When reviewing the results from the clinical questionnaires along with a demographic survey of the 118 participants, the research team found some surprising and some expected results. To begin with the surprising results, this group of participants was moderately to highly content with life. This was a surprise due to previous research suggesting that social support was the strongest predictor of well-being in LGB persons (Lyons, Pitts, & Grierson, 2013). With “Side B” gay Christians not fitting clearly into one group by either being “too gay” for conservative Christians or “not gay enough” for “Side A” (Urquhart, 2014), the researchers hypothesized that this group would have low well-being scores as they often do not have a strong support system. However, in this sample, well-being questions were answered with an average of 80% satisfaction or above in regards six out of nine aspects of life (specifically: “your standard of living”, “your health”, “how safe you feel”, “feeling part of your community”, “your spirituality or religion”, and “your life as a whole”). We found that some of this variance was accounted by extrinsic religiosity levels: the higher scores on organized and non-organized religious activity correlating with higher well-being scores.

Another unexpected result from the data was found around distress levels in this “Side B” group. Previous research on the LGB community suggests that this group of participants has higher levels of distress than their heterosexual counterparts (Bolton & Sareen, 2011; Bostwick, Boyd, Hughes, & McCabe, 2010). However, our sample of 118 celibate gay Christians experienced sub-clinical amounts of depression, anxiety, and stress, with 70% or more of the group of participants scoring in the normal range on all three subscales. What was not so surprising was the connection between attachment style and distress. Depression, anxiety, and stress scores were significantly affected by attachment style, with secure attachment styles correlating with significantly lower levels of depression, anxiety, and stress than preoccupied or fearful-avoidant attachment styles. This result supports the personal testimony of those who say that community and social support are necessary for this group (Hill, 2015; Nouwen, 1996). 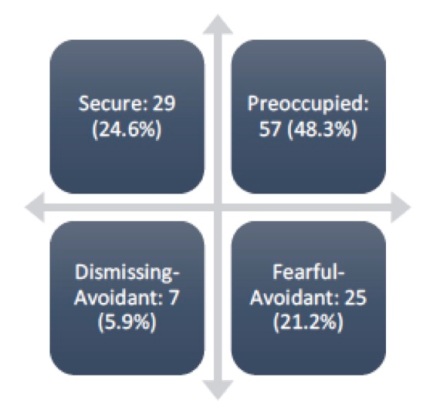 Finally, another expected result was the high levels of intrinsic and extrinsic spirituality in this group. This is not surprising since the LGB population (Pew Research Center, 2015) and the celibate population (Abbott, 2000; Olivera, 2004) tend to have a high desire for a spiritual life. According to the present study, a combination of healthy attachments and spiritual intrinsic and extrinsic meaning is the combination needed to bring about psychosocial spiritual health through lowered distress scores and higher well-being scores. 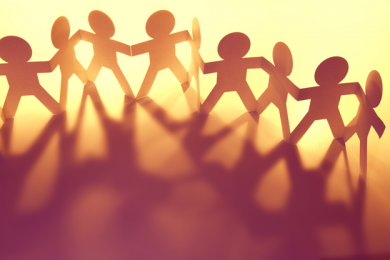 So, now what? While significant attachment wounding and/or concerning levels of depression or anxiety may need to be dealt with within the mental health community, there is much that the church and those who support Side B persons can do. Church education is vitally important in supporting the celibate gay Christian population considering that many in this population will seek direction primarily from their church leadership. If, as this study suggests, attachments are key to lowering depression, anxiety, and stress, the church must respond with receptive hearts and consistent friendships. Andrew Marin (2014), in the mission statement of The Marin Foundation, a nonprofit purposed to build bridges between the LGBTQ community and conservatives, suggests the importance of biblical and social education and diverse community gatherings. Biblical education to church staffs and congregations is vital as the church community needs to stand in unity and find comfort in their beliefs, while they exist in the tension. Social education is just as important as so many are uneducated about the myths surrounding homosexuality (i.e. that the population is all HIV-infected, that they are anti-traditional family, etc.). Church congregations also need training about the population in order to approach them more effectively (i.e. not call them “a homosexual”, not begin dialogue by discussing sin, etc.). Finally, once the church is educated and unified, the church must actually go out and engage with the LGB population. The hope behind this bridge-building effort is to support the change in the culture of so many conservative groups that see the gay community as the opposition. This change in culture is crucial if the church is going to serve this population in any kind of successful way.

This change in culture is not just surrounding biblical and social beliefs, but also the ideas around Christian friendship. Wesley Hill (2015) speaks of how the church does not value platonic friendships as it used to: “However our society might pay lip service to friendship, the fact remains that the only love it considers important – important enough to merit a huge public celebration – is romantic love” (p. 33). Hill (2015) suggests that the church offers the same kind of ceremony and commitment to platonic friendships as we do romantic ones. Hill’s suggestion answers the problems found in this paper: loneliness, fear of a solitary life, fear of people leaving, etc.

So, what are practical ways to move towards this kind of culture-shift? Specific suggestions from Eve Tushnet (2014), a celibate gay Catholic writer, include affirming the real power of friendships, leaving behind the idea that depending on friendships is “clingy”, and remembering that the church is meant to be the “family of God”, in which we make lives together whether you are single, married, gay, straight, or any other identity. This kind of movement offers an environment that is more of a “safe haven” for the celibate gay Christian to go to in times of need.

My hope is threefold in the publishing of this data. First, and foremost, my hope is to normalize the experience of celibate gay Christians. The personal testimonies of “Side B” individuals I read as a part of the literature review for my dissertation always spoke of the loneliness, confusion, and the “feeling crazy” part of this. I hope that through this study, this population is validated in their pain and provided hope for a different future. That leads to my second goal, which is to provide hope for the celibate gay Christian population. This population has been so forgotten in the psychological research, and my hope is that this study will be among the first of many that will be done in order to effectively walk alongside this group. Finally, I pray that this study is a call to the church to step up to the plate. We are called to carry each other’s burdens, and this is a burden that has been ignored for too long. If you have any further questions about this research, please feel free to contact me (christine@wayfarecounseling.com), or I would love to direct you to the ISSI website.

8 thoughts on “ISSI Celibate Gay Christian Study: A Thank You and an Update”